Clojure "endeavors to be a general-purpose language suitable in those areas where Java is suitable" (from Rationale). To effectively target the JVM platform, Clojure needs to provide ready access to Java libraries, ideally in a way suited for dynamic development. In practice, this means meeting the JVM platform in two places:

Clojure build tools have traditionally taken the approach of wrapping the Maven ecosystem to gain access to Java libraries. However, they have also forced this approach on Clojure code as well, requiring a focus on artifacts that must be built and deployed (which Clojure does not require). This approach has created friction for Clojure developers, making it hard to e.g. work with libs not yet publishing artifacts, work on speculative changes w/o artifacts or across multiple libs, or give control to a 3rd party to manage shared dependencies.

The JVM classpath consists of a series of roots, either directory paths or the path to a jar file. Classes (and Clojure files) map via package or namespace to a path relative to a classpath root. For example, the java.lang.String class can be found at path java/lang/String.class and the clojure.set Clojure namespace may be found at paths clojure/set.class (for AOT), clojure/set.clj, or clojure/set.cljc. When the JVM needs to load one of these files it searches each root for the relative path and loads it when found.

We divide the process of building a classpath into two primary operations: resolve-deps and make-classpath. Below is a high-level view of this process: 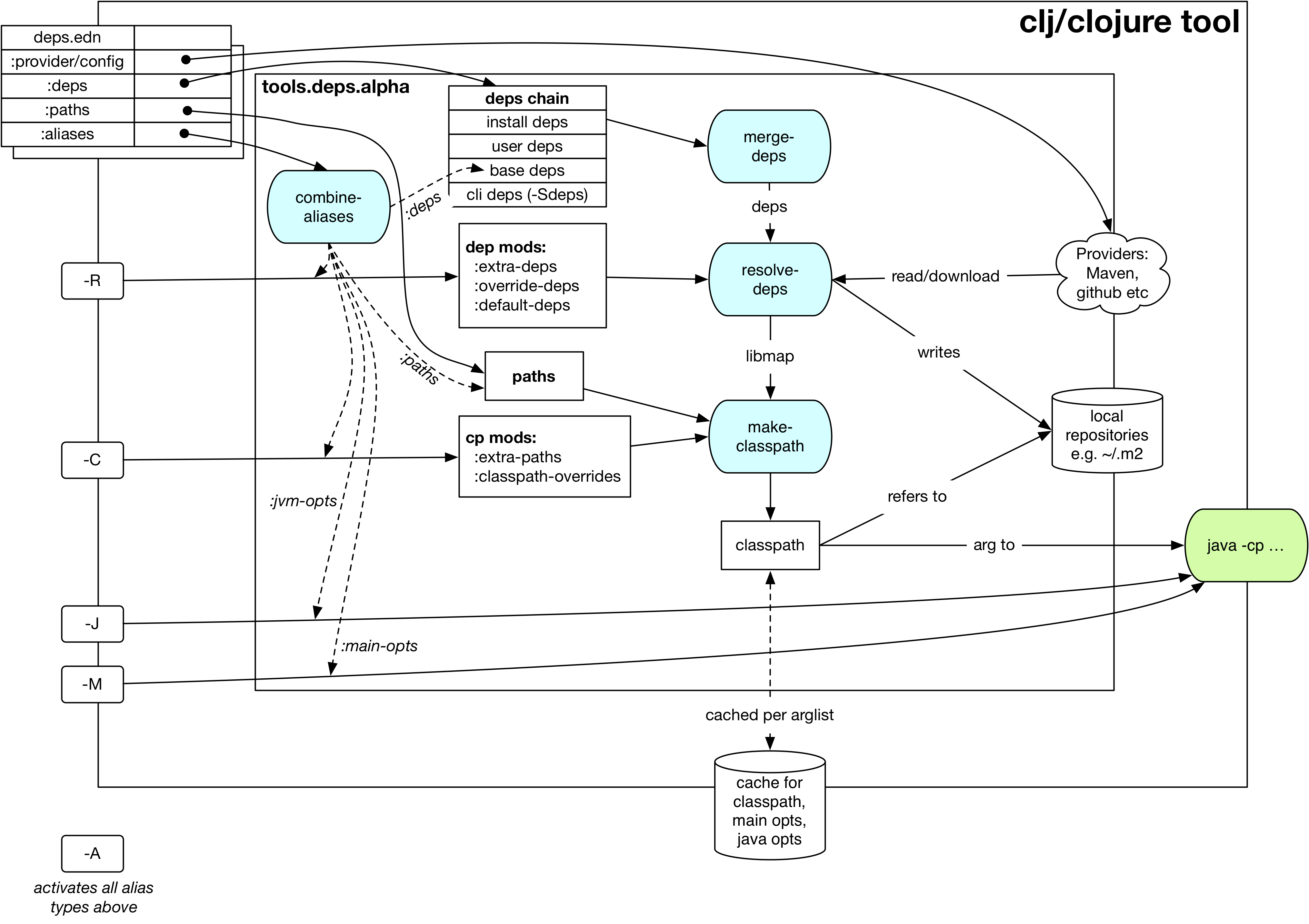 resolve-deps takes an initial map of required dependencies and a map of args that modify the resolution process. It builds a full graph of transitive dependencies, resolves any version differences, and flattens that graph to a full list of dependencies required in the classpath.

The deps are a map of library to coordinate. The library is (in Maven terms) the groupId and artifactId, which are sufficient to locate the desired project. The coordinate is used to describe a particular version that is being requested from a particular provider (like Maven).

For example, this deps map specifies a (Maven-based) dependency:

resolve-deps expands these dependencies to include all transitive dependencies, cut cycles, resolve version differences, download required artifacts from the provider, and produce a lib map of the flattened set of all needed dependencies and where to find their artifacts:

The lib map lists all libraries, their selected coordinates, the :paths on disk, and a list of dependents that caused it to be included. Here you can see that data.priority-map was included as a dependency of core.cache.

The second args-map is a map of optional modifications to the standard expansion to account for common use cases: adding extra dependencies, overriding deps, and default deps. These can be used separately or together, or not at all:

:extra-deps is the most common modification - it allows you to optionally add extra dependencies to the base dependency set. The value is a map of library to coordinate:

:override-deps overrides the coordinate version chosen by the version resolution to force a particular version instead. This also takes a map of library to coordinate:

:default-deps provides a set of default coordinate versions to use if no coordinate is specified. The default deps can be used across a set of shared projects to act as a dependency management system:

The make-classpath step takes the lib map (the result of resolve-deps), the internal source paths of the project ["src"], an args-map of optional modifications, and produces a classpath string for use in the JVM.

The args-map includes support for modifications to be applied while making the classpath: adding extra paths, and overriding the location of libraries specified in the lib map. These modifications can be used separately or together or not at all in a map like this:

:classpath-overrides specify a location to pull a dependency that overrides the path found during dependency resolution, for example to replace a dependency with a local debug version. Many of these use cases are ones where you would be tempted to prepend the classpath to "override" something else.

The configuration file format (in "deps.edn" files) is an edn map with top-level keys for :deps, :paths, and :aliases, plus provider-specific keys for configuring dependency sources.

After installation, deps.edn configuration files can be found in (up to) three locations:

The deps.edn files in each of these locations (if they exist) are merged to form one combined dependency configuration. The merge is done in the order above install/config/local, last one wins. The operation is essentially merge-with merge, except for the :paths key, where only the last one found is used (they are not combined).

You can use the -Sverbose option to see all of the actual directory locations.

Dependencies are declared in deps.edn with a top level key :deps - a map from library to coordinate. Libraries are symbols of the form <groupID>/<artifactId>. To indicate a classifier, use <groupId>/<artifactId>$<classifier>.

Coordinates can take several forms depending on the coordinate type:

Paths are declared in a top level key :paths and is a vector of string paths (typically relative to the project root). These source paths will be included on the classpath.

While dependency sets are merged across all of the configuration files, only the last paths found in one of the config files is used, prior ones are ignored.

Aliases give a name to a data structure that can be used either by the Clojure tool itself or other consumers of deps.edn. They are defined in the :aliases section of the config file. These Clojure tool flags use the following well-known alias keys:

You can activate all three aliases to create a classpath that switches to an older Clojure version, adds the benchmarking library, and includes the test directory in the classpath to see how it changes the classpath:

You can use -A to include all types of aliases or define aliases that cross multiple alias types:

Coordinates are interpreted by procurers, which know how to determine dependencies for a library and download artifacts. tools.deps.alpha is designed to support an extensible set of procurers that can expand over time. Currently the available procurers are: mvn, local, and git.

Procurers may also have configuration attributes stored at the root of the configuration map under the same qualifier. The mvn procurer will look for :mvn/repos. The installation deps.edn configures the default Maven repos:

Then in your deps.edn include a repo with a name matching the server id (here my-auth-repo):

Then just refer to your dependencies as usual in the :deps.

Add a :mvn/repos that includes the s3 repository root:

S3 buckets are specific to the AWS region they were created in. The s3 transporter will attempt to determine the bucket’s location. If that doesn’t work, you can specify the bucket region in the url explicitly: "s3://my-bucket/maven/releases?region-us-west-2".

For authenticated repos, AWS credentials can be set in the ~/.m2/settings.xml on a per-server basis or will be loaded ambiently from the AWS credential chain (env vars, etc). The repository name in deps.edn must match the server id in settings.xml:

AWS S3 credentials can be set in the environment using one of these mechanisms:

For more information, most of the advice in this AWS document describes how credentials are located. Note however that the Java system properties options will NOT work with the command line tools (but would work if using the tools.deps.alpha library directly).

In environments where the internet is accessed via a proxy, existing Maven configuration in ~/.m2/settings.xml is used to set up the proxy connection:

Refer to the Maven Guide to using proxies for further details.

The server id in settings.xml must match the repository name in deps.edn:

This mechanism is used by repositories that authenticate using a token, rather than by username and password.

The supported git url protocols are https and ssh. https repos will be accessed anonymously and require no additional authentication information. This approach is recommended for public repos.

ssh repos may be either public or private. Access to a git repo via ssh requires an ssh keypair. The private key of this keypair may or may not have a passphrase. ssh authentication works by connecting to the local ssh agent (ssh-agent on *nix or Pageant via PuTTY on Windows). The ssh-agent must have a registered identity for the key being used to access the Git repository. To check whether you have registered identities, use:

which should return one or more registered identities, typically the one at ~/.ssh/id_rsa.

For more information on creating keys and using the ssh-agent to manage your ssh identities, GitHub provides excellent info:

Note: user/password authentication is not supported for any protocol.

The clojure tool is a runner for Clojure. clj is a wrapper for interactive repl use. These tools ultimately construct and invoke a command-line of the form:

The dep-opts are used to build the java-opts and classpath:

The following process is used to construct the classpath for invoking clojure.main:

Classpath files are cached in the current directory under .cpcache/. File are of two forms:

where the <hash> is based on the config file paths, the resolve-aliases, and the classpath aliases.

The cached classpath file is used when:

For tools installation, see the instructions in the Getting Started guide.

An independently-developed chunk of code residing in a directory hierarchy under a root. We will narrow to those libraries that can be globally named, e.g. my.namespace/my-lib.

A snapshot of a library, captured at a point in time, possibly subjected to some build process, labeled with a version, containing some manifest documenting its dependencies, and packaged in e.g. a jar.

A particular version of a library chosen for use, with information sufficient to obtain and use the library.

An expression, at the project/library level, that the declaring library needs the declared library in order to provide some of its functions. Must at least specify library name, might also specify version and other attrs. Actual (functional) dependencies are more fine-grained.

An ordered list of local 'places' (filesystem directories and/or jars) that will form root paths for searches of requires/imports at runtime, supplied as an argument to Java which controls the semantics. We discourage order-dependence in the classpath, which implies something is duplicated (and thus likely broken).

Given a collection of root dependencies and additional modifications, creates a fully-expanded dependency tree, then produces a mapping from each library mentioned to a single version to be used that would satisfy all dependents, as well as the local path. We will also include those dependents for each entry. Conflicts arise only if libraries depend on different major versions of a library.

Creates a classpath from a resolved lib-map and optional extra local lib paths. Current plan for lib-map does not provide for control over resulting order.

A human numbering system whose interpretation is determined by convention. Usually x.y.z. Must protect against 'semver' interpretation, which allows libraries to break users while keeping the name the same. Ascending by convention - higher numbers are 'later', vague compatibility with lower/earlier.

This occurs when the dependency expansion contains the same library with more than one "version" specified but where there is a relative ordering (either by number or by SHA etc). Version differences can be resolved by choosing the "later" or "newest" version when that relationship can be established.

A version conflict occurs when the dependency expansion contains the same library with more than one "version" such that the best choice cannot be automatically chosen:

A repository of library artifacts - e.g. Maven central or Clojars

Mentions in source code of library (sub)components that must be in the classpath in order to succeed. namespace and package/class names are transformed into path components.

See the project’s wiki for a list of tools that use or work with tools.deps.alpha (or the clojure tools) - tools for project creation, packaging, and much more.